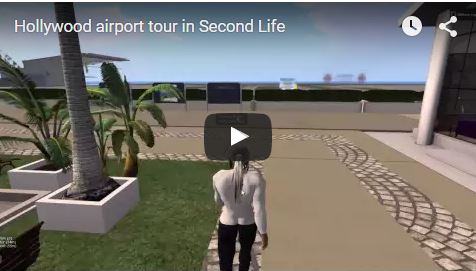 Why did this get started? Well originally, when I went into SL for the first time it was to see the future of marketing; as told to me by a friend. What he failed to tell me was that Second Life was a very large virtual world with so much to offer. Most of second life was is all client created. That’s right, the users of second life created this incredible place. From things you can purchase to wear on your avatar, to entire worlds of role playing and so much more.

Builders went wild! That is why in many of my walking tours I wear a shirt made for me “builders gone wild” as a parallel of “women gone wild” which was a popular show at the time. Now, once in SL I got stuck in a place called Gor. This is a role-playing world based on the books of John Norman, all 26 books in the series. I also learned to build once I watched the 83 cities in Gor being built. Well, being an engineer and very creative this appealed to me. However….

Once I was out of Gor for a visit to what we call the earth world I rapidly found out that most everyone I meet was afraid of a “Gorean” and was always counseled to stay away from us. I knew this stereotype was not very accurate, so I started to go from Gorean city to city filming the build plus some of what goes on there. Then I branched out too many other places in second life.

In addition to the many role-playing worlds in SL, builders have created most of the famous cities in the world and some not so famous. There are many dancing venues that feature everything from DJ’s to live music events from all over the world. How are live events possible? Well the artists can network with each other then with some gear pipe their feed directly into the venues feed and thus you have a live band. Some places also offer live singers with is a bit easier then coordinating members in a band.

Some of the role-playing worlds are Star Trek, Star Wars, mermaid worlds, medieval worlds, WWII and so many more. Playing in SL is basically free so you can join then explore. We even have NPR podcast Fridays where you can site and listen to NPR and the host even asks questions from people in SL!

You want love you say? Well there are many social places for that, events, dances and others where you might meet that special person. You can even get married in SL! So, go join and enjoy SL!!!

Welcome to our blog posts